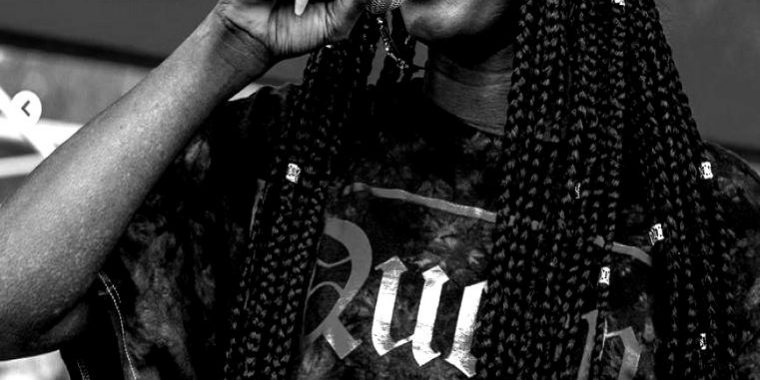 Welcome to Part three of our interview with the artist known as L3XDIVINE. Last time we talked about some of her earlier records and being accepted within the Christian hip Hop space. Today, we talk about the “Jackson Pollock” Remix challenge, how she got her name, and some other stuff.

TZ:  So let’s talk “Jackson Pollock” remix challenge. Is it fair to say this challenge woke up the folks who were sleeping on you?

LD: To be honest, I don’t think folks were sleep, they were just ignoring ya girl!*laughs* Folks knew who I was but the challenge did kind of shock people. I was sitting back watching the feedback and wondering why folks were so surprised.

TZ: Let’s be real, you weren’t coming with those kinds of bars on your songs. Folks knew you could spit , but didn’t know you could spit spit. People were cheering you on and the women in our space rallied around you, it was a dope moment for sure. Has anything changed, since you kind of got a co-sign from Andy?

LD: Kind of? He put me on his song and I was like, “Wait what?” I’m usually so chill, I gotta get better at celebrating my wins. Folks were like, “Naw, Lex, this is huge.” Folks were telling me that Andy had never worked with a female Christian Hip Hop artist before. He’s worked with plenty of singers but no rappers, the same can be said of Canon, who was also on the song. Folks were letting me know I made history. I was feeling shut off but after this challenge, I felt things open up and my name was kind of pervading into the space a bit more. Things are kind of the same, it’s just people put more respect on my name now. 2020 was already a great year, so this was really the cherry on top.

TZ: Let’s get into your name. I want to do something different. I want to tell you what I think your name stands for and you can tell me if I’m right.

TZ: So your name is Lex and the 3 instead of the “e” is cool and different. Divine because you talk about divine things. Is that correct?

LD: what about the backwards “e,” the three? What does that stand for?

LD: Yeah, that’s right, and the name goes even deeper than I thought. When I first got the call to do music full time, I knew I would need a name. So I got my Bible and figured I’d randomly open it and whatever word my finger landed on would be my name. However, it landed on the word “the” and that wouldn’t work. I was reading the part of the Bible that breaks words down and stumbled across the word “divine” and I loved it. Then I started seeing the word everywhere, even on shower curtains! Who has the word “divine” on shower curtains??! So I went to set up my social media accounts and it was available. It was a wrap from there.

TZ: On your music video for “Wake Up,” you did everything yourself. Tell us about that song and the need to be so hands on with your music.

LD: Just not having people to help me. Also the responsibility, the responsibility to do what God tells you to do. I used to have a defeated mindset, for a while my mom was helping me shoot videos. Then there was a time where I was separated from her and wasn’t doing anything. Like I said, I had a defeatist mindset and didn’t believe I could shoot videos by myself. Then one day the Lord woke me up and I heard Him tell me clear as day, “Get up, go to the roof, buy a tripod, and shoot the video.” From that moment on, I realized I could do it. The first video I shot by myself was “I Ain’t Convinced,” and when I saw how it turned out, I realized I had no more excuses.

LD: As far as the song, I guess I was just seeing a lot. With so much going on in the world, I just feel like we get such a surface level and cookie cutter Gospel, but nothing about me is cookie cutter. It just seems like we are so sleep when it comes to dark forces and principalities. Even with what we struggle with. As a woman, when it comes to Instagram, I’m dealing with a spirit of vanity while I’m scrolling. I was seeing so much and when I feel I have a message ruminating in my spirit, it has to come out. And that’s what “Wake Up” was, just saying we are asleep on so many things, and that’s why in the video I’m arguing with myself. There’s so much going on in the spiritual realm that is coming against the people of God, and I did my best to talk about it on the song.

That’s a wrap for part three of the interview! Come back next Tuesday for the final installment of “Getting to Know L3XDIVINE” interview series! Any questions you may have about L3X will hopefully be answered in the finale of the series!