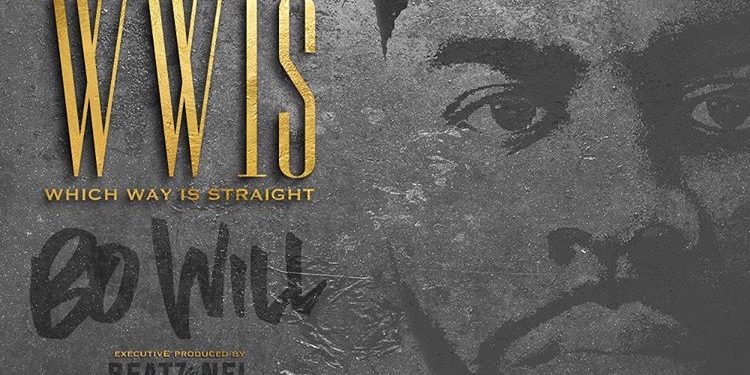 Fall is here, and the music is starting to change with the seasons. Before hoodie and pumpkin season settles all the way in, there is some music released in August that is worth visiting. One such project is New Orleans based emcee Bo Will’s ‘Which Way Is Straight’ album.

This project was entirely produced by Beatz by Nel and he put his foot in this project as they aim at a specific sound that’s prevalent throughout the project. The first song on the album is the title track, “Which Way Is Straight.”  Bo is asking the Lord which  way he should go, as there are a lot of directions he should go. I like Bo’s flow and the effects on his vocals. The track has a sense of urgency to it as Bo is seeking answers. This first track has me intrigued and has piqued my interest.

The second song, “Best In The Making,” greets the listener with some soulful horns, sounds like a saxophone and Bo gets right to it. This song isn’t just about work ethic, but what that ethic can produce in you. It can make you be the best version of yourself if you develop the right attitude about work. I like the use of off rhyme as he rhymes “Best In the Making” with “Trials perfected my patience” Bo cites the wisdom of his father and the example of his brother when it comes to working and following your own path. Bo is two for two on this project. The third song, “Don’t Fall” gives us our first real look at Bo as he doesn’t rap with any effects on his voice. The song starts with a nice vocal sample and Bo just goes right in. Bo doesn’t appear to want to waste a second on this song as he talks about his inner circle of friends. He talks about their trials and tribulations and cites that he’s the first to put their trials in a verse. I like the hook on this one as he says he has his Faith in the Lord and leans on his brothers so he won’t fall. If you have a relationship with God and good friends, you won’t fall. I appreciate the message Bo conveyed with this song.

Next on the project is “Heal Us,” and this is Bo interceding for the nation. All you have to do is take a look around to see we are in desperate need of healing, and that’s what Bo asks God to do on this song. The beat has a hymnal feel to it, which goes along perfectly with Bo’s intercessory raps. Will’s “Fear No Evil” is essentially Psalms 23 on steroids. This song sounds like victory and Bo is skating on Nel’s beat. No weaves in and out of various cadences and flow patterns and keeps the listener engaged. He even gets his croon on as he sings, “Faith don’t fail me now.” I always appreciate those who can take the ancient wisdom of the Bible and make it sound current and catchy without dumbing down the message. I feel like “Certain Way” is just “Which Way Is Straight” by another name. The song is good but I feel like it’s redundant, and could have been scrapped from the album.

Halfway through the album and we land on “Gift Is Your Curse.” Judging from the title, I didn’t know what I was in for but I was pleasantly surprised. I love when Nel uses these soulful samples at the beginning of the record and Bo dives in headfirst into the song. The things that seem good for you can actually mean you harm and Bo deals with that in the first verse. Then the hook comes and Bo switched it from,”Your Gift Is Your Curse” to “Your Curse Is A Gift.” On the second verse he expounds upon the fact that because you’ve already made it through bad times or “curses,” you can make it through whatever life throws at you. From the beat, the concept, and the flipping of the hook, this song may be my favorite from the album.

For the next two songs, “Forgive Me” and “Love Ain’t Enough,” Bo taps into his relationship. On “Forgive Me” he talks about how he knows the way he acted gave his wife reason to have trust issues and he’s asking for her forgiveness. On “Love Ain’t Enough,” Bo acknowledges that it takes more than love to make a marriage or any meaningful relationship work. It takes hard work and determination among other things. On “More Of You,” Bo asks the Lord to increase so he can decrease. He knows that Lord always comes through, not when Will wants but always at the right time. The next track is “W.T.R.C.,” which stands for “When The Reaper Comes.” Bo tell the listener that they can’t take anything with them when death comes for them. He questions if they are really saved and really in the Word. There are a lot of folks acting like followers of God, and Bo doesn’t want them to be surprised when the reaper comes. The second verse is aimed at those who may have been in the church but they walked away. I like how Bo said, “You let the Devil finesse you out your faith/ and when you come to church you always show up late.” He’s really talking to those with a religious mindset as well as the skeptics, this is a really great verse and could really pierce a veil and open people’s eyes. This is a great and almost necessary song for this album.

As we round the final corner and head into the last three songs of the project, we arrive at “Don’t Hold Me.” I like the melodies on this one as well the singing in the background. On this song Bo pleads to not hold him prisoner to his old ways. This is like the sequel to “Forgive Me,” after asking for forgiveness someone can still hold you at an arms length. Bo prays that this isn’t the case as he documents the past and how he has changed. I like the line, “This the pain of the cut healing” this is a vivid depiction of what Bo has gone through. The next to last song is “Walk It” and its got some bounce to it. Bo talks about the importance of living the Christian life he talks about. The first verse is about Will walking in his calling and he ends with the line, “Son of a king make sure you address me properly.” I like the hook on this as Bo raps, “Change my life under that water/ gotta finish what I started.” The second verse gives us a better look at Bo’s life before Christ, but when he made the decision to live for Christ he literally dove in. To the point where he went to get baptized and didn’t have a change of clothes. Bo is really all in for Jesus and he showcased that on this track. The final song is “Heaven,” a fitting final song as that’s the final destination after walking the straight road. This song aims to encourage the Believer to keep walking the straight and narrow path to get through Heaven’s gates. The song has a melodramatic sound to it, this is the type of song that you don’t turn up to but really sit with it. This is a great way to end the album.

In conclusion, this was a great album from start to finish, and more people should hear it. Bo doesn’t just talk about spiritual matters but incorporates his real relatable life in his music. Bo Will got a lot of things off of his chest in his album, it didn’t feel like he held back at all. His chemistry with Beats By Nel is amazing, and this is the formula upcoming artists should follow. Find a producer and build a sound together so both the artist and the producer can grow together. My only complaint is that there was way too much auto tune used on Will’s vocals, there’s a lot of songs where he uses it and it could become a crutch. I loved the songs where Nel through some soulful samples and used sounds to draw out an emotive response. Bo sounded the best over those type of beats. Nel and Bo sound great together, but I do wonder what they would sound like if they added other artists in the mix. I would like to see Bo have featured artists on his next project, hear how he would sound with someone else on a track with him. This was a strong album and sequenced in a way that took you on a journey. If you are looking for new music you might not be familiar with, you should check out Bo Will’s ‘Which Way Is Straight,’ I don’t think you’ll be disappointed.