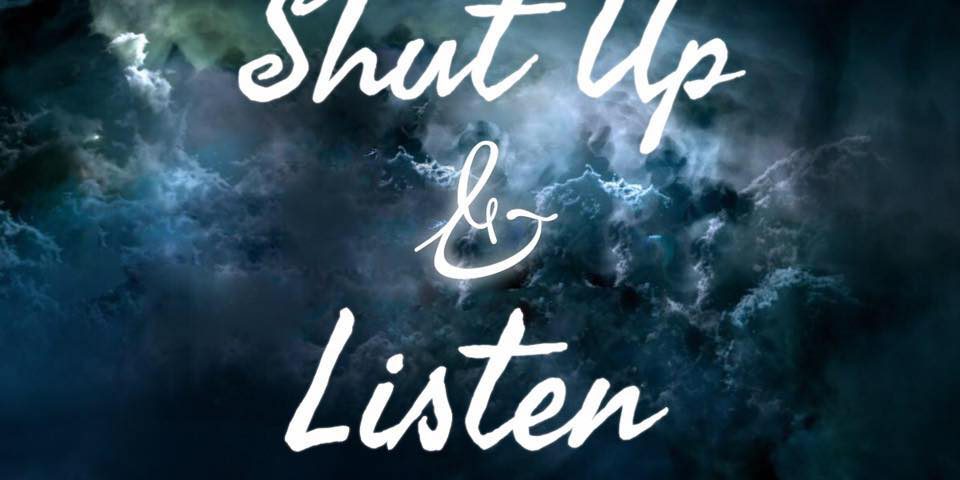 There’s a lot going on in the country right now, just in case you hadn’t noticed.  So many voices screaming in the wind, but not a whole lot is getting done. Everyone thinks they have the solutions to this nation’s problems but they’re all blowing smoke. Kris Noel has a lot to say but first you have to ‘Shut Up & Listen.’ Kris covers quite a few topics over the course of his seven song project, so let’s dive into ‘Shut Up & Listen.’

The very first thing we hear on this project is a not a beat but it’s simply Kris Noel’s voice a cappella on a piece titled “Not Welcome.” Kris wastes no time in launching into an a cappella double speed piece which keeps the listener on edge as to who or what he is speaking to that isn’t welcome. It becomes clear near the end of the piece that he is speaking to the negative traits that have been plaguing the world at large. Mr. Noel transitions to his take on Kendrick Lamar’s “DNA” on track number two. Kris does a great DNA remix and he flows in the pocket very well. Loved his lines about apologizing for Christians who act like they made it so they treat others wrong, and guarantees that those self-righteous Christians don’t speak for Heaven’s throne. Very powerful statement and some people need to actually hear that sentiment on record. Near the end of Noël’s verse he just starts rapping in Spanish with no warning! Then the beat drops and Kris raps double time a cappella.  Noel understands that identity is important to every living person but true identity that completes is found only through Christ alone.

The third song is simply called “The 3rd “and there is a lot of wordplay and intentionality with the number three in this song. Kris switches it up and does a banger of a song in homage to the place he was made and raised in… The “third coast.” The Southern region of the country has the nickname “Third Coast” but this could also be a double entendre for the third ward of Houston, as Noël said he puts on for “the Lone Star” better known as Texas. Doing it all for He was raised on the 3rd, very clever with the wordplay and Kris had some help on the song as it featured Ballistic and Danny Cooper. So we have the third song, representing the “Third Coast,” speaking of He who was raised three days later. I see what you did there Kris. Next up we have the aptly named “Shut Up” where Kris has a tempo change up and adjusts his flow accordingly. Kris spills his heart about police brutality, stereotypes as well politics. Kris also says that the only name that can save us is that of Jesus. A lot of people may take issue with this song but if they shut up long enough they may learn something.

We can see the finish line approaching on this album but Kris can’t let us go until we “Do Somethin.’”  Kris has a great line in which he states, “Everybody wants muscles but no one wants to do the work it takes to get ’em.” Talking about people with dreams and goals but are talk and no action. Mr. Noël urges all of us to take the necessary steps to bring about whatever it’s is we wish to see. Dipping back into the Spanish and English alternating with no problem is such a unique skill and I can’t get enough of it. “Quit talkin’ bout it do something” is just the kind of tough thing said in love which many of us may not be able to digest without taking offense, but it is sorely needed in this day and age. Kris follows that up with “I Feel” featuring Mike Bell and this is a song with a heavy message. The song starts off with a clip of a young man who despised the hypocrisy he saw in the church, and how he became quite good at poking holes in people’s faith who was inconsistent with their walk. It’s a very powerful way to start off the song. This song has a somber mood to it and the piano keys help add to that atmosphere. Kris just spills out how he feels about judgmental Christians, and holier than thou folks. He drops a lot of quotable lines, too many to try and recite. The song then transitions to someone who is calling Lecrae a false Christian and Mike Bell starts to rap how he is tired of folks slamming other Christians. The beat then drops and Kris goes a cappella at the end of the song again. “Honestly I don’t think the product is a problem but rather the vendors and how they market it” is such a strong line. The last song is probably the most polarizing song on the entire project fits its title “The Challenge.” The song starts off with hand claps and is such a powerful song. Kris is very balanced on this song as he speaks on police brutality, how people of color can also be as bad as those we resist. Kris challenges us to hold the mirror up to ourselves and see our own blemishes. That should give us the grace to give others grace as we navigate life in this fallen and broken world.

All in all, this is a very solid and much needed project. If I could summarize this album in one word it would be “balanced.” Kris spends almost as much time pointing out problems as he does pointing to the solution, which is namely Jesus. When speaking about those who are lost he spends time pointing out those of us who know the Truth but our words and actions turn the lost away from the Gospel. When speaking of issues with police brutality and white supremacy, he calls the black community to the carpet and says that it’s possible for us to be just as prejudiced.  If I could offer some critiques it would just be two words: slow down. Kris has a lot to say and not a lot of time to say it in but I believe he should slow down a bit more. Speed rapping is so widespread that it’s not as special as it used to be, but rather, it’s become almost a gimmick. Kris Noel is way too talented to just be tossed into the pile of speed rappers because he is actually saying something. I love how he goes from English to Spanish as it reminds me of T-Bone, the first Christian rapper I ever heard. No one is doing that so Kris could capitalize on that, and I’d love to hear him rap on some Latin influenced beats. I don’t know if this is his first project, but he should definitely be on your radar. I can’t wait to see what he serves us next, but until then it’s time to be the change we wish to see. The best way to do that is to ‘Shut Up & Listen.’