Armond has been rapping for Jesus a little over a decade, so he has a strong discography that not too many Christian artists can match. However, his good friend Jonathan Baker stepped up to the plate and the battle is on! Not only are the two good friends, but they are located in the same area, which should make the battle even more interesting. They both rappity rap their faces off, but Jonathan Baker can sang, so he may have an advantage.

One can speculate all day who would win, but there’s only one way to find out for sure. Tune in on September 30, to see the battle. All the info is in the flyer below. Who do you think will win and what songs do you want to hear? Armond’s “Bless My Soul,” and “Dashboard/Rearview” are high on this writer’s list, but you have to tune in to see for yourself. 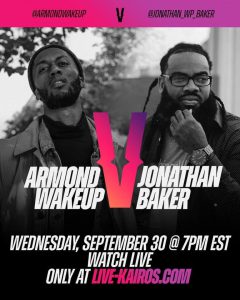