A. Ward To Battle in “Mask On 2” Event | @iamaward @trackstarz

A. Ward is set to return to the Rare Breed Entertainment(RBE) battle rap platform in October. Ward’s last battle on this platform was against West Coast veteran Danny Meyers.

For the upcoming “Mask On 2” event, A. Ward is set to battle against veteran and former Champion Of The Year, O-Red. Ward keeps getting paired against the vets because he brings the best out of them and he never backs down. This event is going to take place October 10,2020, and is sure to be another great battle in A. Ward’s catalog. 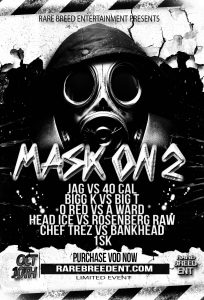