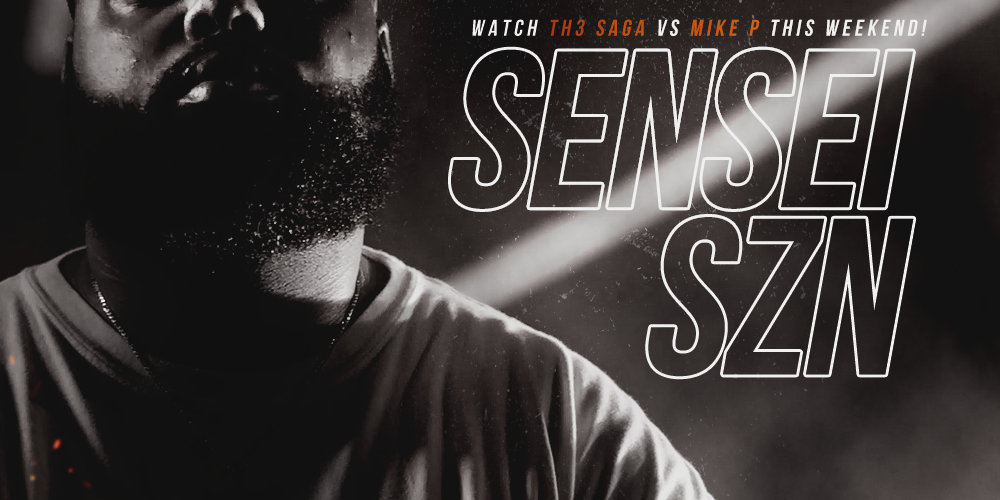 It is no stretch of the imagination to say that today, history will be made. Christian Battle Rapper, Th3 Saga, will be making his NOME(Night Of Main Events) debut! Saga’s road to this main stage has been long, it’s only fitting Saga touch down on the tenth anniversary of this legendary battle rap event. Th3 Saga is at the point where his peers acknowledge the skill, the fans say he deserves bigger plates, and his stock is rising with each battle, but it wasn’t always this way.

Around six years ago, Th3 Saga made his debut on the URL(Ultimate Rap League) platform in his PG(Proving Grounds) battle against Blaqu Mugga. He was met with a lot of critique and suspicion from both the battle rap community and the Christian community( I remember the comments left on certain websites). There were questions on whether a Christian could or even should battle rap and be in that environment, and Saga was at ground zero for all the hate thrown his way. He triumphed over Blaqu and went to BET’s UFF(Ultimate Freestyle Friday) to battle against T-Top on television. Th3 Saga walked out with a loss and a lesson. Shortly after, he was put on the card for the classic “Rookies Vs Vets” event. But before he made it there, he had a one off with Prep. His battle against Prep was amazing and the crowd was going crazy for Saga’s bars, and only added to the anticipation of his battle against Shotgun Suge.

By this time, Saga had started to win over the Christian community and showed us how you could be in a dark place, shine your light and not be corrupted. I remember the encouraging tweets we all sent his way just before the Rookies Vs Vets event, we were excited and proud of what our brother was doing. After the live event, the battle was released on Easter, 2015. When I first watched it, I gave it to Saga 3-0(forgive me, the Christian bias was strong back then) but after I re-watched it, I gave it to Saga 2-1.  I think it’s worth noting, Saga was the only rookie in his class that beat one of the vets at that event.

Saga’s battle rap career were on the rise and he took on all challengers. Chilla Jones actually brought out a porn magazine during their battle to tempt Saga. Things were going well until he ran into Chess, the youngest battle rapper on the URL at that time. Saga’s battles had been either debatable or clear wins, but this is arguably the first time since T-Top that he clearly lost. There’s something about light that tends to make those either head towards it or shrink further into darkness. Saga’s battled against Muslims(Suge and Prep), a battler who said he had a demon in him and liked it(Swave Sevah), to his most demonic opponent, Tink Da Demon. The URL not so subtlety paired Th3 Saga against the bad guys, villains, and those whose beliefs were in direct opposition to Saga’s. In his bout against Tink, his opponent actually tried to summon a demon in the middle of the battle! It didn’t turn out like he thought, as the crowd had Saga winning 3-0, making it arguably one of his first bodies.

In six years, Saga has broken a lot of ground. He paved the way for Street Hymns, Loso, and A. Ward to walk through and the super group IV Horsemen was formed. Saga caught hate for leaving the NWX to create the Horsemen, but I believe he’s all the better for it. People may never say it, but Saga makes his opponents switch up their style when they battle. Go back and watch Saga’s battles and see how some of his opponents went from the typical gun bars to real life and religion. Somewhere along the way, his pen and personality evolved into Sensei Saga and he’s been on a run for at least two years.

Battle rap is finicky and driven by politics and Saga’s career is proof. There have been battlers who lost battles, not shown up, forgotten their lines, only to be rewarded with bigger and better opportunities. Meanwhile, Saga is just now getting his NOME debut. This isn’t a happy ending though, because even now some people are saying Saga doesn’t deserve to be here. It’s mostly fans and comments on social media, a lot of battlers and battle rap media support Saga and acknowledge all the work he’s put in. No matter how long it took, Saga is finally here and I believe he’s not leaving anytime soon.

Saga’s career and rise feel very personal to me as I only started watching battle rap because I saw Saga step into the ring. My very first article submitted to Trackstarz, five years ago, was about battle rap and inspired by Th3 Saga. I believe he’s going to do great in his battle today and he deserves all the accolades and respect he’s receiving right now, he’s earned it. Saga’s battle rap career serves as a testimony and template for those who’ve been called to an unconventional ministry. Just be faithful and work hard, it won’t be easy, but anything done for Christ shouldn’t be. I believe in giving people their flowers while they are around to enjoy them. Saga is a pioneer and on his way to cementing his name in the top tier of battle rappers. I doubt that even he saw this back in 2014, but God works in mysterious ways. Saga is going to shine in this battle while at the same time praying his opponent’s soul is right. Th3 Saga, first round is on you, it’s Sensei SZN.