Counter Culture is a paradigm shift from the normal thought process of the everyday person, for in a time and age where the phrase “Do it for the culture” is a prevalent statement; the question to be asked is What’s your culture? A culture is a set of values and philosophy that governs a group of people and many without knowing, have lost their identity/self/dogma to religion, trends/clout, all in the quest to blend in.

“COUNTER CULTURE”, a 35 minute album of Melody, Rhythm And Poetry, embodies a result of well produced thoughts and vibes centred at bringing conversations that would juggle minds into reinventing themselves and defining their culture.

The rapper who is widely known for his Christian faith and beliefs, joins forces with a few other prodigious minds; notable for excellence. They include artists like: Africans hiphop legends, such as M.I. Abaga, Rooftop Mcs and Vector tha Viper.
Also UK based Songbird, Naffymar, South African Spoken Word Artist/Rapper, Mercy Tschiamo and some of his amazing colleagues, such as Eli-J, Limoblaze, Chize as well as young rising stars with amazing vocals K3ndrick and Brain. 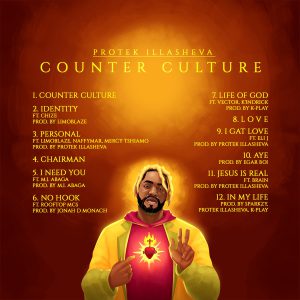