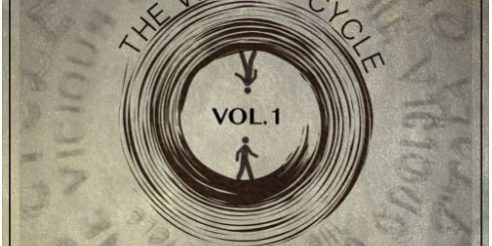 The year is winding down, but that doesn’t mean that music is. While many artists have had their Spotify numbers wrapped and unveiled to the public, there are a lot of artists whose music could have slipped by unnoticed. One such project is by Arizona’s own Mr. Phelps’ ‘The Vicious Cycle, Vol. 1’ that dropped back in November. This project is full of pain, struggle, hope, and faith and is sure to tug on your heartstrings and encourage you. Mr. Phelps had this to say about his project, “The intent of this album is to spark a reaction, or an emotion, and to seriously make you think about life and the choices we make. These short stories are all connected and tell one big story. I have been waiting to do this project for 10 years, I finally have the guts to pursue it and see where it leads. These stories are things I have witnessed in my youth growing up in Watts. Things I have witnessed as an adult in Arizona, and personal struggles I have dealt with. The whole story is molded around a young kid named Jamal. He desires to do good but finds it nearly impossible considering the cards life has dealt to him. He is searching for something but has no idea what it is. His actions and the previous actions of his parents and others, sparks a chain reaction that entangles these characters in a vicious cycle of deceit, lies, pain, and hatred; as they search for love, acceptance, meaning, and purpose in all the wrong places. Ladies and gentlemen, I present to you ‘The Vicious Cycle.’” Let’s dive into the project and dissect it track by track.

The first song is “Fear” and it starts off with some lullaby sounds and then Phelps comes in with his laid back flow speaking on his insecurities in each verse. However, the hook sounds like it’s coming from God’s point of view, “I know you ain’t perfect but you’re worth it. I created every little detail about you, wish you could see what I see inside you.” The third verse gets extra real as Phelps’ character Jamal speaks on his fear of doing good and being forgotten. He wishes he could believe what God says but he’s struggling. The lines, ” I’d rather crawl up in a ball than leave my comfort zone and risk losing it all” really hit home on this song. Those lines were very relatable indeed. The second song “Stay” starts off with a child asking his mother does she have to g and she told the child she’ll see him tomorrow. Somber piano keys along with Phelps get the listener in their feelings rather quickly. Featuring Kassandra Ochoa on the hook, Phelps paints the picture of the young character Jamal wondering why his mother keeps leaving him alone at night. By the third verse Jamal has become numb to his mother leaving, and his Uncle Willie teaches him how to run the streets and make money. By the end of the song Phelps’ character ends up leaving his mother and the hook changes from “don’t leave me mommy I’m your baby boy” to “don’t leave me baby your my baby boy.” That hook change adds some real feeling to the song. Next, “On The Run” picks up exactly where “Stay” left off with Jamal leaving home to run the streets. Jamal is tryin to figure out what was so alluring about the streets to his mother and his curiosity finally got the better of him. Jamal found the love he was looking for with a squad of friends doing illegal things and the final verse ends with Jamal making his first drug sale. The hook fades out with Phelps singing, “Somebody unlock this cage for me.”

Next on the project we have “Open Letter” featuring Lindy Eldred. Phelps starts off the song as if he’s been placed on hold with customer service only to flip it a couple of lines later and reveal it was God he was calling. Phelps raps, “Dear God I need answers, cuz I don’t even have the strength to even lift my hands up” and that really hits home. This song is definitely an open letter to God as Jaal vents out his frustrations about life. The last verse is God talking back to Jamal and leads with, “All them tears that you cried, I bottled, not only do I hold your past I hold your tomorrow.” These are some very reassuring words to both Jamal and the listener. On “Want It All,” we hear an alarm clock ringing and now Phelps is speaking on what a blessed life he has and introduces us to the character named Pete. Pete has a really good life with a wife and two kids but his mind is still stuck in the past. He is immersed in old thoughts of his father physically abusing his mother, thoughts to when he used sex and drugs to heal the pain inside. The second verse finds Pete thinking about when he met his wife, which was at a point where he was about fives years sober. The early years were great but something was bubbling beneath the surface. The final verse of the song speaks to Pete working late to avoid his wife, misdirecting his anger at his kids, but it ultimately culminates to him sleeping with his supervisor who turned out be his boss’ wife.

The song “Cold World” is the most upbeat song on the project so far, the piano tempo seems to speed up and Phelps keeps up with the cadence of this beat quite well. This song seems to rehash the narrative of Jamal’s mom leaving him and the appearance of uncle Willie making this song a little repetitive. Winding down near the end of the album we have “In the Moment” which speaks to 3 different characters. Jamal sells drugs on the first verse, Pete sleeps with the boss’ wife and the boss found out which led to Pete getting laid off. Pete ended up getting the woman pregnant, loses everything, and commits a crime to steal a diamond ring from a woman to sell to a drug dealer. The third verse finds the character Chantel, who is Jamal’s mother and sees things from her side of the story. At first this song seems a little repetitive until you see how their stories intersect and are connected. The best part of the song is the hook, “you living for the moment, you living for the moment, and we don’t even own it.” The rhyming of “moment” to “own it” was good songwriting. The next to last song is  “FIGHT” and the hook on this one sounds like it’s supposed to be an anthem or a chat and the guitar is a nice touch. Phelps’ character Jamal feels alone but he knows he needs help. The song is a fight to be free and a fight to accept one’s self as they truly are. this a good song to listen to when you are going through. The song ends with a mother asking her son through a note for forgiveness. The final track is a bonus track “Thank You,” and this is the happiest we hear Phelps on the entire project. Phelps thanks the Lord for bringing him through, and he does a lot of singing on this song.

In conclusion, this album is a solid story telling project. The vicious cycle is one of abandonment which leads to looking for love in the wrong places to crime. This cycle is a very real thing in today’s time and Mr. Phelps did a good job of driving that point home. He kind of drove the point too well about the mother abandoning her son as it was mentioned on just about every song. I think moving forward, telling a story is great, but take a break from the main story at least for a couple of songs. I would love to see Mr. Phelps use other beats than the piano melody driven production he selected for this project, and he did switch it up near the end of the project, but I would to see more variety in the production. I wonder how this style of production would translate to a live performance type of situation.Also, Mr. Phelps did a lot of singing on this project and I think for the next project perhaps he could use more singers to sing the hook. I would also like to hear how he sounds rapping with other rappers, as I don’t think he had a single rap feature on his debut project. Overall, this is a solid project and definitely worth your time. The story is great, the characters are relatable, and at the end we are given some hope through the help of God. Do yourself a favor and check out ‘The Vicious Cycle, Vol. 1.’