The soulful artist known as Sean C. Johnson recently announced some huge news that his 2018 project ‘Days Like This’ has made it to the first round of ballot voting for the upcoming 61st GRAMMY Awards! The project was submitted for Best R&B album and his song “Daydreaming” featuring The Junk Band was submitted for both Best R&B Song and Best Traditional R&B Performance. So his project is submitted in 3 categories, and that is all we  know for now but this is huge for Sean because he has been on the grind for quite a while! Let’s keep this brother lifted in prayer and continue to support his project so that he becomes nothing less than undeniable in the lane he’s in! You can find ‘Days Like This’ wherever you stream or consume music digitally. 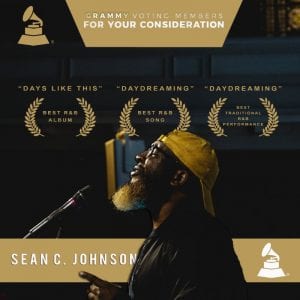