The Black Panther | Tell Them Who You Are | @damo_seayn3d @trackstarz 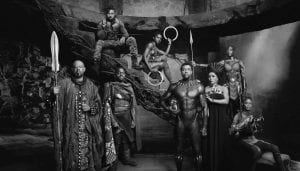 I have to say that this film is one of the best films I’ve ever seen.  Not just good for a comic book/action movie, but overall a solid film.  I’m not doing a review.  If you want a review check out the article by my homie Kenny Fresh here on www.trackstarz.com.  He did an awesome review of this movie, but I want to hit a bit of a different angle with this.

Not by a long shot am I trying to label this a Christian film.  There are a lot of spiritual, religious and ritualistic aspects to this movie.  I just want to take some of those things I saw to point out some biblical truths.  I’m a firm believer that if you keep your eyes and ears open God can speak to you through a multiplicity of ways.  Not just in church or locked away in a corner with your Bible.  As you go about your day doing things that aren’t necessarily focused on God He can find a way to speak a message to you even then.  BP is just a back drop or an object listen I’m using to show a bigger truth.

Now as I watched this film I would have to say my big take away was identity.  You saw it from perspectives.  First, from T’Challa as one who was raised in his culture and had an understanding of who he is.  The other being Killmonger who was abandoned and longed for the people and heritage he had been separated from.  This separation turned his heart evil and caused him to seek that connection through evil means.

Isn’t that like our adversary the devil?  He looked at what he had and allowed the greatness he saw in himself to turn his heart.  He looked outside of his identity or who he was called to be to attain a kingdom he already had access to.  Killmonger could have easily reached out to anyone in the nation of Wakanda and came back in a peaceful way.  He would have had access to all of the resources of the kingdom.  Instead, he chose to do a hostile takevover that ultimately led to him being rejected again.

Then you look at T’Challa as a type of the Saviour.  He proudly protected his kingdom.  Like Christ his ultimate test was having all of his power taken from and fighting to defend the honor of his throne and kingdom.  This is how he proves his is worthy to be on the throne.  He faces Killmonger and loses.  Perceived to be dead and gone he is brought back to life with the help of King M’Baku.  One of my favorite lines from the film is when T’Challa looks at Killmonger and says, “I am not dead.  Neither did I yield.”

IN like manner, Christ gave up all of His power and glory to face the ultimate battle to redeem us from sin.  Some might say, “But Christ actually died bro.”  Yeah, but the enemy did not kill him.  Jesus said in John 10:18, “No one can take my life from me.  I sacrifice it voluntarily.  For I have the authority to lay it down when I want to and also to take it up again.  For this is what my Father has commanded.”  (John‬ ‭10:18‬ ‭NLT‬‬ http://bible.com/116/jhn.10.18.nlt) He basically told the devil, “I’m not dead and I never yielded bro. Give me back what belongs to me.”

Because Christ, our King, did this great work we are able to receive Him and not just be His servants. We are now royalty. We are kings and priests unto God. (Revelation‬ ‭1:5-6‬ ‭NLT http://bible.com/114/rev.1.5-6.nlt) Not only that, but God is Daddy to us now. It’s not just a servant to master relationship, but a loving father to His sons and daughters. We have accepted Christ. We were buried with Him, raised with Him and now reign with Him. I like the way Paul said it in Colossians 2:

“For you were buried with Christ when you were baptized. And with him you were raised to new life because you trusted the mighty power of God, who raised Christ from the dead. You were dead because of your sins and because your sinful nature was not yet cut away. Then God made you alive with Christ, for he forgave all our sins. He canceled the record of the charges against us and took it away by nailing it to the cross.”
‭‭Colossians‬ ‭2:12-14‬ ‭NLT‬‬

We are to identify ourselves with Christ. He stripped Himself to identify with us. He who knew no sin, but became like sinful flesh to redeem us. (2 Corinthians‬ ‭5:21‬ ‭NLT‬‬