Propaganda’s album ‘Crooked’ is continuing to make waves as excellent music often does. Scrolling through Pop’s twitter feed my eyes saw something that made me do a double take. Hip Hop heavyweight magazine XXL was promoting Propaganda’s album!!!! The support went much deeper than a simple tweet of the album. There was a nice write up of the album as well as some of Prop’s accolades such as some of the big tours he’s been on and his feature on Lecrae’s ‘Church Clothes 3.’ They also had ‘Crooked’ via Spotify at the bottom of the write up for anyone who wanted to listen! I have no idea how this happened. Maybe Prop has relationships with people at XXL ( he was on their Ante Up Podcast episode 24), but I’d like to think his music is so dope it had to be recognized ( charting number 3 on iTunes hip hop charts probably didn’t hurt either). Nevertheless, Propaganda deserves every bit of success that he has gained thus far and prayerfully XXL’s support will help solidify what many of us already know: Propaganda makes dope and thought provoking music! 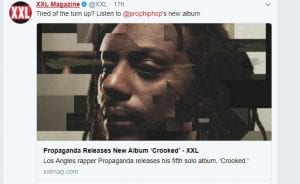