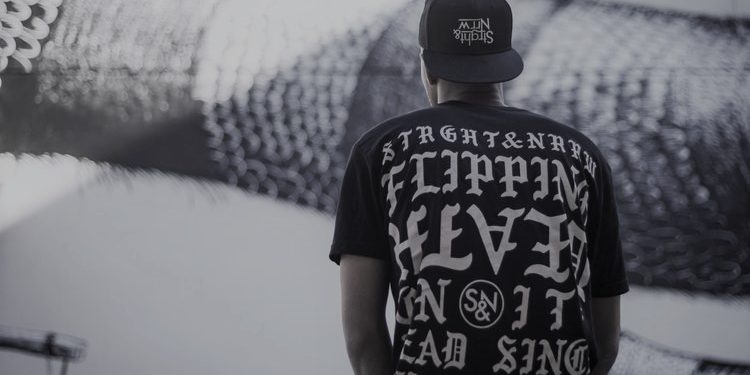 After finding out that after 7 years Strght & Nrrw Clothing was closing down, Trackstarz just knew they had to get an interview. Strght & Nrrw Founder Jay Harris graciously agreed to an interview. Peep the conversation below as Jay touches on the beginning of the clothing brand, to becoming lead pastor at a church and many other things in between.

TZ:  Strght & Nrrw has been around for 7 years. Other than merch from CHH labels, your boutique was one of the only ones having urban apparel for Christians. What led you to start this clothing line?

JH: Having a clothing brand has been my dream since a kid. I’ve always been a huge fan of street wear and sneaker culture. I got to see brands like The Hundreds, Diamond, and Crooks & Castles evolve from the beginning. Strght & Nrrw allowed me to deliver streetwear goods and still deliver a message consistent with my faith in Jesus.

TZ: Is it fair to say that Strght & Nrrw led the wave for the current urban Christian clothing lines, as well as having no vowels in the name?

JH: I would say so. We made it into the market place as a real street wear brand ahead of a lot of other brands in CHH. We made music, curated videos and even musical projects. We shot the “One Direction” video at Flavor Fest and included probably the most CHH artists in one video. Our BSTP mixtape had mad artist on it. I threw almost all the artists a beat I thought they would kill, so other than the beats, all the verses were new. I felt that was big for a clothing brand. So yeah, I feel like we were able to do a lot of “firsts” in CHH.

TZ: What are some of your proudest moments associated with Strght &Nrrw Clothing over the years?

JH: Opening a boutique. The store had a crazy impact on our city. Everyone felt like they owned the store and that’s what made it so special. The “One Direction” video was huge. The next year, we shot the S&N Life video with Jin, Erick Dayz, Uncle Reece, and A-flo during Flavor Fest. Reach records dropped the first track off of Lecrae’s Anomaly in the boutique. That was crazy, because they only gave GPS coordinates for the location to hear the single. One location was a mall in Atlanta, the other at Strght & Nrrw in Jacksonville Florida. Oh yeah, Social Clubs “Cops” video was shot in the store by Wilbert Thomas. T-shirt collab w Eshon Burgundy. Erick Dayz “Stomale” video and his “Box and Bag ’Em video. When we first started the brand we gave away a pair of free Nikes to someone every month. I loved it. Made a lot of great friendships. That has been the best part. The people.

TZ:  Let’s talk about one of your controversial designs “Death” upside down logo. How did you come up with that and what was the heart behind it?

JH: To the best of my ability I tried to stay away from being a brand that just threw Christian cliché phrases on a shirt to make money. That always felt dirty, so I leaned towards ideas and concepts that had a redemptive value and pointed to Jesus. The “Death” concept was all about shock value and the spreading of the Gospel. I think many Believers are in a bubble and very unaware of the disdain many have for Christianity. It’s not “good news” to some because they are blind, others have only heard a works based message and not what Jesus has actually done on the cross and what it means. The “Death” design was meant to create opportunity for believers to articulate the gospel. The idea of death is scary enough. You flip the word upside down on a shirt and people just gotta know what it means. Let em know!!!

TZ: Funny story: I bought one of the “Death” upside down logo Floral hats and wore it to church. I explained what it meant and one mother said “I don’t like that.” A week or so later, her twenty something year old son pulled me to the side and unbuttoned his shirt to show me he had bought a “death” logo shirt. All I could do was laugh. Do you have any funny stories associated with Strght & Nrrw clothing?

JH: This one teacher told me how he had to pull a kid out of class for acting up. The kid was rocking a Strght & Nrrw tee. The teacher who’s my homie broke down the meaning of the brand and was like don’t disrespect. Told him represent or take the shirt off. I thought that was crazy because I meant for it to almost serve as a “gang” identity replacement of sorts. We are a family or a gang under Christ aligned with Biblical values. I loved that a teacher caught that.  A lot of great moments over the years though.

Stay Tuned for Part 2 as Jay dives into what made him close down the boutique, his role at The Ville Church, and the future of Strght & Nrrw the clothing brand.