Over the weekend both Christian Battle Rappers Loso and A. Ward  announced their next opponents. It’s interesting because even though it feels like they just battled, they are both getting ready to battle again, and both events are within a week of each other. Loso will be battling against veteran D.NA. who was also at the last Bullpen Battle League event “Fade”  at the “Close Range” event on November 5th. This is going to be an interesting match up because D.N.A. has seen Loso battle up close and is familiar with his style. It’s going to be interesting to see what angles he takes because he is in the crew NWX alongside Th3 Saga, so it’s doubtful he’ll diss Jesus in his bars. It will be an interesting battle. 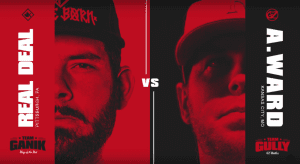 A. Ward was just in Toronto but it looks like King of the Dot is bringing him back out for their “Ganik vs Gully” event on November 12th. Mr. Ward will be battling veteran emcee Real Deal. Real Deal has over 50 battles and is known in Philadelphia for his skills. It’s interesting that both Loso and A. Ward haven’t broken the double digits in terms of numbers of battles, but they are both matched up against tried and true veterans in the battle rap world. Let’s keep these brothers in prayer as they prepare for these upcoming battles.